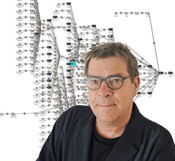 The Atlas V family, which includes the flight-proven Atlas V 400 and 500 series, are the latest evolutionary versions of the Atlas launch system. Atlas V uses a standard common core booster™ (CCB), up to five strap-on solid rocket boosters (SRB), an upper-stage Centaur in either the Single-Engine Centaur (SEC) or the Dual-Engine Centaur (DEC) configuration, and one of several payload fairings (PLF). A three-digit (XYZ) naming convention is used for the Atlas V 400 and 500 series. This hour is to celebrate one year NASA’s mission OSIRIS-REx. The OSiRIS-REx was launched on 8 September 2016. It has been traveling for more than a billion kilometers though space to grab a sample of dust from the astroid 101955 Bennu. NASA is hoping to find the origins of this universe in these molecules. The OSIRIS-REx will plant a chip containing art while taking the sample. On this chip pieces of sound art and sound research of the composer-sonologist Roland Kuit. This is hour is an ode to the rocket Atlas V.