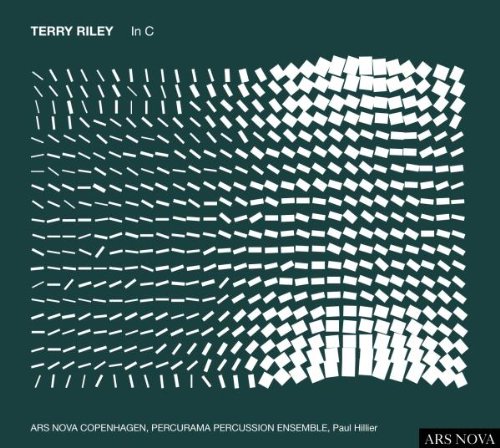 Terry riley - in C performed by Ars Nova Copenhagen & Percurama Percussion Ensemble
- Released by Ars Nova Records in 2006 and added to the eMu catalogue 04/07/10 as the first ANR release.

Terry Riley's masterpiece In C  the piece with which American Minimalism established itself in the history of music  is here, for the first time, to be heard in a version for only voices and mallet instruments.

ARS NOVA Copenhagen is widely recognized as one of the finest vocal groups in Europe. Founded in 1979, the ensemble today is busier than ever. In addition to its annual season of concerts in Copenhagen and throughout Denmark, the ensemble regularly appears across Europe, in North and South America, and Asia. Ars Nova is also building collaborations with creative artists in different fields such as drama, film and ballet, as well as cultivating new modes of concert performance and innovative repertoire.

At the heart of ARS NOVA Copenhagens work is its equal dedication to early music and new music. Some programs explore the cross-currents between the two, while others form detailed portraits of individual composers or genres within a given period.

The group has its own record label, ARS NOVA Records (distributed by Naxos) on which Taverner & Tudor Music II - Gloria tibi Trinitas Mass is the most recent release. Other recordings  like Taverner & Tudor Music I and the voices-and-percussion version of Terry Rileys 60s masterpiece In C  received great reviews all over the world. Currently Ars Nova is finishing a large-scale recording project together with Dacapo Records (Danish national label), to record the six major narrative works by Heinrich Schütz, all to be released in 2009-10.
arsnova.dk

- An absolutely stunning version, not to be missed.